Having been a long-time Moodle user and occasion user of Blackboard and D2L’s Brightspace, I was excited to have the opportunity to review Canvas. Instructure, the developers of Canvas, began hosting their learning management system (LMS) in the cloud in Canada for the first time last spring. This created the opportunity for smaller school districts, colleges, universities, and other learning organization that do not have the capacity in-house to host Canvas, to have their data stored domestically and subject to only Canadian laws. Instructure provided me with access to the basic version of Canvas and gave me a comprehensive tour that highlighted many of the unique features of the LMS.

I was surprised to learn that Instructure developed Canvas as an open-source tool. All updates to Canvas are immediately released to the community as soon as they are developed. An institution can download the LMS themselves and install the latest version on their own servers, or they can license Canvas Cloud, the hosted version. The development community is large and active, so Canvas users also benefit from bug fixes, enhancements, and third-party tools they produce. This commercial open-source model addresses the concerns that users of proprietary systems have in getting adequate, responsive support from the vendor, as the development community is on hand to provide additional support.

Upon logging into Canvas, you are greeted with the Dashboard, familiar to most instructors. The Dashboard includes courses you are registered in or teaching, as well your personal calendar with course due dates, upcoming course events, grades, and course mailbox. An attractive feature from the instructor’s point of view is that students have not only the option of entering their preferred email address to receive course notifications, but instead can designate their preferred social media site to receive them. This feature addresses the frequent complaint of instructors that students don’t read their email. When creating a course, the instructor has the option of keeping the course private or allowing the course home page to be public. The latter is a helpful feature for those wanting to provide a teaser to entice prospective students to enroll in their course, while at the same time not exposing student work to the public. Schools may like this as well as it allows parents to view what their children are studying.

Rather than creating a course from scratch to become familiar with the features of a Canvas, I decided to import a Moodle graduate level course that I am currently teaching. At the same time, it provided me with the opportunity to see how well Canvas imports courses from other LMSs. This is valuable to know as many potential Canvas users may be switching over from other platforms, therefore instructors and instructional developers would want to minimize the work required in transitioning to the new platform.

I first tried exporting my course in its native Moodle format as Canvas documentation suggests that this is possible. However, after several attempts to import, I kept getting a fatal error. Next, I tried importing the IMS 1.x version of my course and was successful! Below is the Canvas version and the original Moodle version. Not all features transferred over fully. Most noticeable is the graphic from the Moodle course, which disappeared. The Moodle Course Announcements didn’t transfer over to the Canvas Course Announcements but appeared as just another discussion forum. The Moodle Gradebook, Assignment submission tool, and the Moodle Glossary tool didn’t transfer at all, although their absence was indicated by a blank line. All-in-all, I was quite satisfied with how well the transfer worked. Instructure told me later that the reason the Moodle version didn’t import was because I attempted it before a global update was done to my demo account. After the update, the Moodle import worked and was superior to the IMS version as the Gradebook and Assignments converted correctly. Nonetheless, users shouldn’t expect their courses to import flawlessly. In fact, Instructure suggested to me that the time trying to convert courses is better spent developing a new version of the course from scratch in Canvas.

Once I had my new Canvas course running, I was able to take a close look at its features. Canvas has all the features you’d expect to see in a modern LMS, but it stands out in some of the refinements the developers have incorporated. The social media notifications, mentioned above, is just one of them. I particularly liked the editor tool in the discussion forums. To me this tool is extremely important as one of the greatest strengths of online learning is the ability for all learners to interact among themselves and with the instructor. Therefore, ease of use and reliability of the text editor is paramount. Canvas offers a complete range of editing tools – and then some. A frustrating feature of the standard Moodle editor is that you can’t adjust font sizes, which can be done handily in Canvas. A very appealing tool in the editor is the capability of recording video messages within the editor itself. When you click on the icon (indicated by red arrow below) a recording window pops up, and after you’ve finished the recording is embedded into the message. The tool uses Adobe Flash. When I first tried recording, it didn’t work. I then upgraded to the latest Flash version on my Windows PC and everything worked fine. A word of caution, however, is that in large installed bases of Canvas, help desks are bound to get many calls over this feature not working because of missing, out-of-date versions, or browsers not supporting Flash. It would be preferable for Canvas to migrate away from this proprietary tool due to its decreasing popularity. The editor also allows for accessibility checking and the insertion of mathematical equations, a highly desirable feature, although I noted that the checking did not appear as comprehensive as in Moodle.

Another refinement of Canvas is how conveniently course assignments can be created and edited. Instructors can add their own grading scheme (e.g., points, letter grades, percentages) right on the assignment creation page, as well as due dates and other requirements of the assignment. Once the assignment is created, a rubric can be created so that students can see in advance the criteria that will be used for assessing their work. This rubric is available when grading assignments too, which avoids the necessity of the instructor having to refer to another menu or printing it out.

The Canvas Gradebook looks very clean and uncluttered. A convenient feature of the Gradebook is the capability to display not only grades, but a variety of analytics, by only clicking on the student’s name. The analytics include the number assignments missing or late, and activity and participation compared to the rest of the class. There is also an icon to allows you to immediately message the student without having to go to another page in the LMS. By clicking on the Analytics button on this page, you are taken to graphical views of course activity. Course analytics can also be accessed from the home page.

There are a few other features of Canvas that deserve highlighting as well. One is what Canvas calls Collaborations. This tool allows groups of students to work on the same document in real time using, as a default, Google Docs. Office 365 can also be licensed to work seamlessly in Collaborations, which allows students to collaborate on the popular Microsoft tools such as Word and Excel. I was told that some 400 other tools can be integrated into Canvas, including Badgr.com, that allows learners to be awarded Open Badges for their work. Another feature is MasteryPaths that allows instructors to set up multiple pathways for learners to achieve the same learning objectives based on their performance. Being an instructor, I appreciated the exact view of a course that the student sees, including assignment submissions and grades, a feature Moodle doesn’t fully implement. In doing this review, I frequently clicked on the Help button, which took me to a very readable and extensive database of documentation on Canvas.

Lastly, I wanted to test out the Canvas mobile apps as separate ones are available for IOS and Android devices for students, teachers, and parents. Since I had an iPhone I downloaded the iOS versions. The student app home screen was clear and readable with all the course components appearing as a list (see below). I was curious how the discussion tool text editor handled video comments since iOS doesn’t support Flash. It took a bit of trial and error to figure out how to do it. You first had to click on attachments, then from that screen click the + icon, and select Use Camera. Once the camera was opened, you could take a photo or video, which then uploaded seamlessly into the editor. An icon in the editor that would take you directly to the camera would be a helpful enhancement. Overall, the app is very handy and works well, however a feature that I would like to see is for learners to be able to work offline, and then when they connect to the network later to have their work synched to the server. This would allow learners in areas with poor Wi-Fi coverage and those who don’t have good data plans to make better use of the app. Currently, Canvas has a feature that allows students to download content in HTML format for reading offline on a computer, however they cannot interact with it. 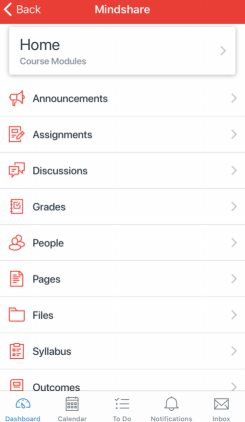 The teacher app was equally well laid out and allows the teacher to post to discussion forums, grade assignments, and add and update content. The parent app offers more than just a public view of a course, as it allows authorized parents to view their children’s course grades, syllabus, assignments, and events. They can even set up reminders for events and assignment due dates that can be sent as push notifications to their mobile device.

After having the opportunity to explore Canvas comes the question of whether I would recommend its use? As an individual instructor, I would not hesitate to use Canvas myself and wholeheartedly recommend it to others. I like its up-to-date and intuitive feeling and ease of use that would make my work much more efficient, especially grading and use of the Gradebook. I believe learners would enjoy using Canvas too. The question is much harder to answer for a large school system or a college/university. If they are looking to move their current LMS from an in-house server to the cloud, Canvas should absolutely be at the top of their list because of its functionality. The costs and stress of migration to a new LMS should not be underestimated, however. Having witnessed such a migration at my own large institution, that offers thousands of courses, a very strong case would have to be developed to justify this. Faculty complaints and pushback would have to be carefully managed even with the most supportive migration plan. Regardless, I would recommend institutions to take a close look at Canvas to see how it stacks up against their current LMS.

Reviewer note: Dr. Ron Owston is University Professor of Education, former Dean of the Faculty of Education and founding Director of the Institute for Research in Learning Technologies at York University, Toronto. His website is http://ronowston.ca.

Check out this graphic about why YOU should attend Connect 2013, May 6-7 in Niagara Falls, Ontario! Register at www.connect2013.ca
X