MindShare Musings – The Connectors, Leaders, and People on the Move 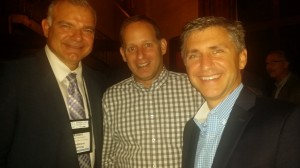 Making New Connections: While at EdNET14 I had the good fortune of randomly sitting next to a fine transplanted fellow Canadian in Dr. Peter Balyta, president, Education Technology at Texas Instrument. Peter completed his PhD at McGill and studied coincidentally under one of our board members, Dr. Suzanne Lajoie. Small world! Of course a hockey discussion broke out and we found ourselves relating Gretzky’s hockey puck analogy to the challenge of timing new innovations in education to making a perfect pass. The reality is that it’s rarely a perfect pass. The more homework a company does in understanding market needs and drivers, the more likely the pass will hit the tape that may ultimately lead to a goal! Too many companies in my estimation put the puck way ahead of the game where schools and districts are not ready for the innovation. As I tell my little hockey players, do whatever it takes to get the puck on your stick. It’s rarely a perfect pass. Perhaps there’s a book in the making!

MindShare is pleased to announce the appointment of Kevin Custer, Founding Principal, Arc Capital Development, to the MindShare Learning Advisory Board. Kevin has had a close working relationship with Canada as a past CEO and investor in a number of successful start-ups and has been a long time friend and colleague to MindShare Learning.

It was a pleasure meeting up with Tom Schenck, President and CEO of Follett while at Ralph Prostik’s (BSG Group) annual dinner at EdNET hosted with presidents’ and CEOs’. Follett is a valued partner to MindShare.

Just when I thought I’d met every possible Pepperdine University alumni in the EdTech space! I was introduced recently to Mark Buchholtz, Director Education Strategy & Media Strategy, eSchool Media, Inc. while at EdNET14. They have an eye for talent!

Ron Reed, Executive producer at SXSWedu celebrates his 4th anniversary. Looking forward to once again partnering with SXSWedu and our friends at the Canadian Consulate in Texas.

One of my most valued reads of the year from Harvard Business Review. The difference between a network and a community (http://s.hbr.org/1saSrRY).

Here’s a super handy School Calenader courtesy of our partners at the CEA (Canadian Education Association).

Be sure to keep us in the loop with your news and success stories! We always enjoy hearing from our community!