MindShare Musings – The Connectors, Leaders, and People on the Move

If I summarize the crazy busy month of October in one word, it is HOPE! My many collaborations with education, industry leaders and students gives me great confidence in our vast country that it’s truly about are passionate leaders and future leaders, who MakeITHappen! Case in point, my visit to Bliss Carmen Middle school in New Brunswick to the site of our Eastern Canadian contest winner. I was met by principal, John Hamilton and vice-principal Jeff Whipple.

As I toured the school, I began to realize why Jacob Lingley won our contest this past year. These leaders are enablers, who nurture their teachers with the support and tools to make the possible happen. I discovered that Bliss Carmen Middle School has Canada’s first ‘Maker Space’ in their hugely transformed library. (include photo here). I heard no talk about lack of funding, wish we could do this or that as I often hear. They have that ‘can do’ spirit. These are the new leaders I see emerging in education–Collaborators, enablers, problem solvers–walking the 21st century talk. 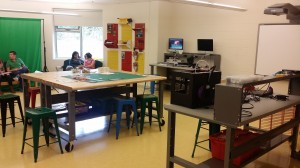 A province on the move! The winds of change are alive and well in New Brunswick–the ones to watch for 2014-15 as the Liberals get settled in with their new government. You may recall we were the beneficiaries of the previous government as John Kershaw, former deputy minister got pushed with colleague, David Roberts, assistant deputy minister, which inspired our collaboration to for C21 Canada–Canadians for 21st Century Learning & Innovation.

I believe its just a matter of time before New Brunswick regains its reputation as one of Canada’s most innovative provinces.

One to watch!  Congrats to a rising star I know through ERDI. CODE is pleased to announce that Julian Hanlon, Director of Education with the Ottawa Catholic District School Board, is the Chair of the Council of Ontario Directors of Education for 2014 – 2015.

This is an interesting infographic I thought I’d share as a parent of College bound kids.
The Habits of Today’s College Students

Here’s a handy toolkit to share with parents that was kind of buried in CODE’s website.
Parent Engagement is Important to Student Success

Fellow Pepperdine Alums and former Faculty MakingITHappen! TableTopInventing sat down and had a conversation with Dr. Gary Stager and Sylvia Martinez this summer at ISTE. Tune into the podcast.

That’s a wrap for this month’s packed MSL Report. Be sure to keep us in the loop for with your news and success stories!

This Week in Canadian EdTech MindshareTV with Melissa Burns, Educator, National Winner of the Canadian schools of the Future Challenge, Archwood School Click Here to ...
X