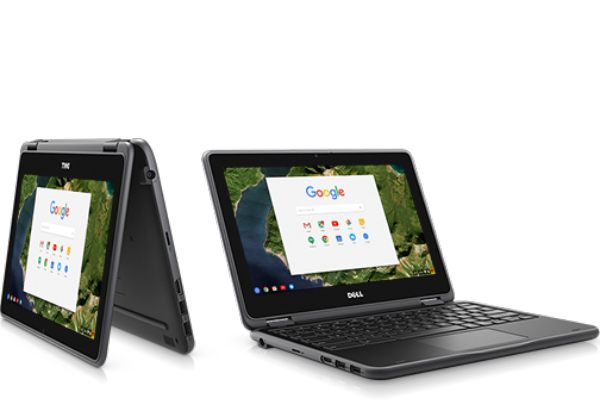 Not all Chromebooks are created equal. For example, my Chromebook of choice is the Dell Chromebook 13 (7310). This Chromebook is not meant for the faint of heart – it’s a superior machine that does some serious ‘Chroming’! I just so happen to be a bit of a power user, and this premium device meets my needs. But what if you’re looking to update your school or school district’s Chromebook lineup for the new school year? Given budgets and ROI one must consider a Chromebook that is robust, feature-rich for the money and lasts a bit longer than a fortnight, particularly in an elementary school! Fortunately, I just happen to have an answer for you!

Enter Dell’s newish Chromebook. The Dell Chromebook 11 (3189) sports an 11.6” HD Touch LCD screen, Intel Celeron N3060 Processor with 4GB Memory and a 32GB SSD. This configuration is more than enough power to satisfy any user in an educational context. No need to upgrade, or look for a device that trumps these specifications because you just wouldn’t require them in a school setting. The 4GB of memory is almost a necessity now for Chromebooks. In the past, 2GB seemed to be standard, however, with the movement of websites to more graphic intensive experiences, the added RAM makes the experience more enjoyable. The processor also seemed to handle various interactive websites that students would use in today’s classroom. This included interactive math websites, a video editing site and doing the one thing that Generation Z students do all of the time – using multiple tabs to switch between research, brainstorming/outlining and an online presentation or word processing sites quickly.

The Chromebook was easy to use. I especially enjoyed using the touchscreen when working on particular sites, and the ability to hyperextend the computer so that you could use it in tablet mode was definitely an asset. The screen could also be used as a presentation screen for a small group of students in a collaborative context. Imagine a group of students working collaboratively in a learning commons, sharing their presentations via a Chromebook that folds so that the screen acts as a mini-display. This ‘tent’ feature alone makes me wish I had a touchscreen interface and hinged display on my premium Dell device. In a classroom, this kind of setup would work nicely, especially given that collaboration using a larger board can be difficult to achieve. All in all the Dell Chromebook 11 scores high points for the ability to use it in many different contexts and in many different ways seamlessly. The battery life was also impressive at 10 hours of computing power.

The Chromebook was quite a solid build. Dell states that it has Drop Protection. However, though this was not qualified in any way, the computer is most definitely sturdy. The Chromebooks I currently use are anything but sturdy. The Dell, however, gave me the impression that it would survive in a classroom with many different users quite easily. In fact, the outside perimeter of the device was encased in rubber which would certainly protect it from bumps and small drops, which can happen quite frequently when students are using the device. The hinges were robust and sturdy and moved quite nicely when you want to open the Chromebook and use it more as a tablet. The tablet mode could come in quite handily when you wanted to use some of the Android apps that you can now port over and use with the Chrome OS. The keyboard was also well thought out, and it could be cleaned after some days in the hands of students since the keyboard is spill-resistant. The keys were well proportioned and easily used. I found myself actually enjoying the keyboard more than my 13” Chromebook.

Dell has also provided what they call the ‘Dell Activity Light’ which can be installed via the Chrome Web Store. This application allows the student to communicate with the teacher if they’re in need of help, or have a question about something they’re doing while using the computer. The light shows a different colour on the outside of the Chromebook to display the student’s particular need. This could be useful, though I didn’t get a chance to review it in a real-world context.

All in all, this Dell Chromebook is worth a closer look if you’re in the market to refresh your current set of Chromebooks. It can act as a tablet, or laptop and is built well enough to be used in a classroom context without hesitation. If this machine were on the market when I purchased my much more expensive Dell Chromebook, I would have certainly seriously considered it, mostly because of its ability to fulfill more than one role. The tablet mode, especially with the capacity to port Android apps to the Chrome operating system, gives this machine some serious power and versatility, particularly when school budgets can’t easily afford both tablets and Chromebooks! 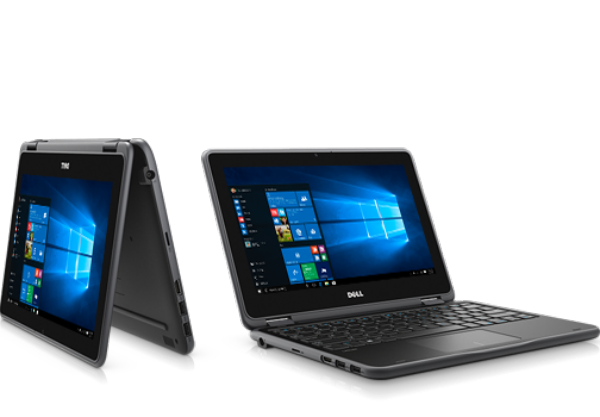 The sister model to the Dell 11 3189 Chromebook is the Dell Latitude Windows 10 Touch screen display. Again, Dell is thinking ‘outside the box’ with this computer! Even though it’s a Windows 10 device, it operates much the same way the Chromebook does as both a laptop and tablet, hence the 2-in-1 moniker. Of course, Windows 10 can quickly switch to tablet mode – think Microsoft Surface devices! – and with a High Definition Gorilla Glass liquid crystal display, it works seamlessly in this mode. It’s powerful enough for most of what a student would use the device for and with an Intel Pentium Processor at 2.5 GHz and 8GB of memory it can handle its own in just about any context, except perhaps video editing. Given that it also comes with a 128GB SATA SSD drive, hard drive speed will not be an issue!

Dell’s hybrid models should really be the ‘rule of day’ in school contexts. With the durability and competitive price, along with the multiple use factor, and long battery life, I can say that that this 2-in-1 computer design will be a ‘go-to’ in the education market. In fact, if we weren’t so ‘managed’ by our own purchasing process in our particular district I’d more than likely place both this Windows 10 and Chromebook hybrid devices at the top of the list for school purchases. They are perhaps a bit more expensive than the competition, but I’ve always maintained you get what you pay for, and in this case, there’s no exception.

I also believe that with the rubberized edges, spill-resistant keyboard, and some drop protection you can’t really go wrong. You can also purchase a mobile computing cart to house and charge the machines when they’re not in use. I think if these tools were used in my school they’d hardly ever be in the charging cart – way too useful, and definitely gives a teacher peace of mind when you consider the robust way in which students often use their devices. And of course, it comes with a combo headphone/microphone jack, USD card reader, full-size HDMI port and 2 USB 3.1 slots. Just the right amount of connections! And to the device also includes a ‘world-facing’ camera so that students can record in just about any context. I can think of myriad ways in which I could use this feature in my own classroom context.

Both of these Dell computers are designed with a real-world classroom in mind. Now that schools are re-designing their libraries to be ‘hubs of learning’ and ‘idea factories’ I can’t think of another set of devices that would fit as seamlessly into these learning commons contexts as the Dell 11 3189 Chromebook and Dell Latitude 3189 Windows 10 devices. If you have the money and you want an excellent Return On Investment, I would seriously consider snatching one or both of these devices up for your learning needs. These tools more than fit the bill for what I’d be looking for in a school looking for ‘work horses’ with the ability to be used in multiple contexts. And the icing on the cake is Dell’s outstanding support. No doubt, ‘stuff happens, ’ and if you can count on your supplier to help alleviate issues that arise from time to time, then again, it’s worth the investment.

This Week in Canadian EdTech with Dr. Claude Martel, Concordia University, Director of the Institute of Co-operative Education on a mission to provide students with ...
X