A Short Overview of “Shifting Minds: A 21st Century Vision of Public Education for Canada” 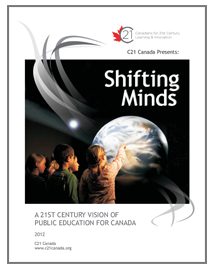 The 21st Century skills movement is not new. Many different groups and organizations and countries have produced their documents, outlined their philosophies and articulated why it’s important to move education systems out of an older paradigm and into a newer one. Of course, this ‘shift’ is required because the world is changing. If a country hopes to compete economically in a growing and more open global economy then there’s a need to ensure that requisite citizens are prepared to function with the proper skills needed to keep a country strong and vibrant. C21 Canada is an organization made up of various groups and individuals who have championed Canada’s understanding and justification for moving our systems of education into this arena of paradigm shifting. And they’ve produced a document entitled, “Shifting Minds: A 21st Century Vision of Public Education for Canada” to prove it.

The document is not long and is a must read for anyone attempting to understand one Canadian perspective on reasons and justifications for 21st Century skill development. By nature the document is alarmist. We should do the certain key things in certain key areas if we are going to succeed in a global economy. I don’t disagree with much of what is touted in the document, but there are however a few areas that are long on theory and short on practice. In fact, I could easily play ‘devil’s advocate’ and propose some inconsistences, or at the very least, ask for a platform for some of the more grandiose statements that have been outlined. I suppose by its very nature however this document is intended to spur a movement toward the ideal – hence, the “vision” – and to that end it’s successful.

The document is set apart by seven ‘highly inter-related elements’ which consist of the following:

I’m not going to go into any sort of detail regarding the aforementioned elements simply because, as I stated before, this is not a long document and it should be read by anyone interested in the 21st Century movement here in Canada.

I would like to have a closer look at the fifth element concerning the various stakeholders in this philosophy of ‘redaction’. And in particular I would like to look more closely at the statements concerning teachers. I do this to give you a flavor of this document and to perhaps highlight some possible issues with some of the statements. Indeed, if we are to change the system we must change the changers and there’s no closer individual to the ‘focus’ of this document – students – than teachers.

If you read the list of things that this document suggests that teachers can do to help bring about change in education you might be overwhelmed by the simple fact that much of what is suggested requires a much more multi-faceted and complex change movement than simply ‘going out to do ‘a’ and ‘b’. For example, ‘pursue creative and innovative teaching practices in your classroom.’ Sounds wonderful! But what does that really mean? What would be a ‘creative teaching practice’ that C21 would consider as indeed ‘creative’? Or ‘innovative’? Quite frankly, to be innovative in any school for the most part requires a far more complex system of support and encouragement than is currently possible. And further, if you’re currently entrenched in a certain way of teaching that would be considered ‘old school’ how would you become aware of what would be considered ‘innovative’ if by it’s very nature innovation requires risk and vulnerability? Again, I get that this document is a ‘vision’ statement and not a detailed ‘how to’ with regards to implementing a system of change. But let’s be careful not to throw into the arena of reality ideas and statements that beg for clarification and substantiation. I’m sure more detail is coming.

I can’t help but think however that whole system re-organization is such a complex process that to add over-simplistic equations to the solution will not end up with a solved problem, but with a problem that is further misunderstood. I don’t disagree that many of the statements pertaining to teachers or any other stakeholder aren’t good in and of themselves. I am however concerned that we put out there these kinds of statements that don’t really help solve the problem, but hinder it because the goals are far above most teachers’ abilities to reach them, especially when the systems that need to be changed are so recalcitrant to change. If I’ve learned anything in my tenure as a teacher immersed in changing teaching and learning paradigms it is this: changing teaching and learning paradigms requires a whole system approach with leaders who are themselves innovative and creative and who are not afraid to vision-cast in such a way as to liberate the ‘captives’ of old system thinking. Teachers are ready, but where’s the leadership? Simply giving a ‘vision’ statement does not mean the vision will be translated into a workable solution. If you give a ‘vision’ make sure the ‘vision’ finds some solid ground to run on with solid leadership and relentless encouragement.

In conclusion I must reiterate that I believe this document is simply a ‘call to action’ based on some fairly broad observations. It’s a good start. I think however that what would be more valuable would be document that every school could employ as a practical guide to getting things rolling in this current century of change. I believe that this would mean that much of what has been stated in this document should be translated into a working manifesto, so to speak. I’m sure that C21 is working toward this kind of document, while providing some support in helping the various key stakeholders embrace a new way of thinking and learning so that we ensure that Canada remains the ‘true North, strong and free.’

I’m pretty sure that plagiarism is not going away anytime soon. I also think that if you are going to plagiarize, then there’s an increasing ...
X