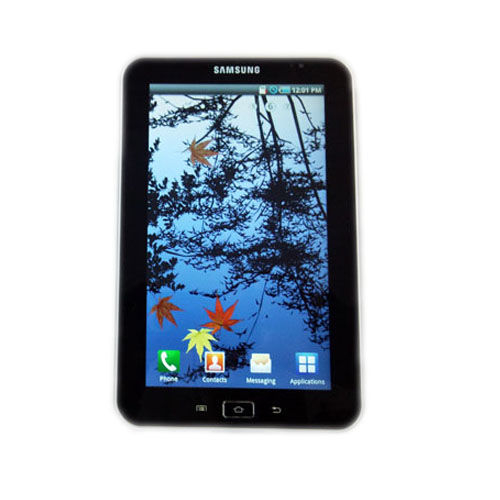 Samsung entered the tablet market very early in the tablet game with their 7-inch Galaxy Tab powered by Google’s Android Froyo OS. It’s different from Apple’s iPad and the Dell Streak on various fronts, but most notably because it’s a 7-inch device, whereas the two other devices are 10-inch and 5-inches respectively. Screen size is a point of debate between manufacturers and the Tab definitely gave me the opportunity to ‘weigh in’ on the debate as to whether 10, 7 or 5-inch screens are more likely to dominate the education market in the future. Of course, due to the simple fact that Apple introduced the iPad into the market first they have the market lead. The Galaxy Tab however has gained in popularity, and I think mostly because it’s more portable than the ubiquitous iPad.

An interesting note is that Steve Jobs, Apple’s iconic lead-hand, stated early on that the 7-inch form factor tablets would be DOA. Well, I don’t believe he’s right, but that will become clearer when all of the major manufacturers put their ‘best foot forward’ so to speak.

I continue to marvel at how people continue to amass around a particular device before asking themselves what makes most sense in their particular context. For me, after having tried a number of tablets, including the iPad, I’m thinking that the 7-inch form factor is more practical, and useable. The Samsung Galaxy Tab is an Android tablet. The earliest versions of the Android OS were not meant for a tablet experience, and  this becomes clear when you start using a tablet with this smartphone version of Google’s OS. When you develop an OS for a tablet you’ve got to consider screen real-estate and functionality, and the earlier version of the Android OS though quite adequate for Android smartphones is not up to the task for a tablet. In fact, the  latest Android OS that’s being developed, codenamed Honeycomb, is intended for the tablets that will run Android.  Motorola has made it quite plain and clear that their forthcoming 10-inch Xoom tablet will be using Honeycomb for this reason: it’s optimized  for use on a tablet. Apparently, Samsung has announced that they will not be updating the OS on the Galaxy Tab to Honeycomb.

Strange, but given that the Galaxy Tab is an expensive 7-inch tablet that is first-generation it makes more sense for them to re-engineer the Tab and power it up for a true Honeycomb experience. Honeycomb will thrive on a more powerful processor and more RAM. Further, the price point for the Tab is high. RIM’s 7-inch Playbook will debut below the $500 mark which definitely puts the Tab outto-pasture because of its higher price tag and less powerful features. What about the Galaxy Tab then? I love the size of this tablet. I truly believe that the 7-inch form factor is the best ‘of all worlds’ since it’s not too small and not too large, which allows for portability while not taking away from a decent screen size for web-related work or reading, or for working on  documents and  spreadsheets or  the like.And after I toted the Tab around London during the BETT conference I can tell you that it  is truly portable, and when you connect to a Wi-Fi network it makes business and life seamless. You can use the 3G network on the Tab as well, but I wasn’t using a SIM card with this device and so I didn’t get a chance to see how that connectivityworked out. The 4G networks are going to be a boon for tablets though simply because of need for speed and everywhere-access, and 3G can be a bit of a bottleneck these days.

The Tab also gives you an SD card slot which is nice for transferring pictures, video and any files that you need to move to another device but since I work ‘in the cloud’ most of the time I can easily use Microsoft’s Live service to upload any file to the very generous 25 GB of storage space  you get when you sign up for a free account.Applications are numerous because you have access to the Android Marketplace and since Google finally figured out that it makes sense to have an Education category for apps, you now have access to hundreds of useful – and not so useful – apps  for your classroom, or daily life. I often wonder if someone has taken the time to figure out how many truly useful apps reside in Apple or Google’s app stores….?

What’s in a tablet? As we move into a frenzy of tablets in this next season of  technology, and  in particular technology in education, I would predict  – safely, I suppose  – that  tablets will  be the new device that  impacts education on several fronts. Technology now becomes affordable, portable, and powerful. If you can add to the tablets true multi-tasking, which is a  huge  ‘must have’ in my books, and connectivity options that allow you to connect to peripheral devices, including interactive whiteboards, then we will have a technology revolution in education on our hands.

I truly believe that Research in Motion’s Playbook will change the tablet space because of the new and very powerful QNX OS which allows for multi-core processing, which in turn means true multi-tasking, among other things. I found that with the Galaxy Tab I was constantly switching between apps which could be veryfrustrating; if you can switch a screen quickly and efficiently to another application and then back  again, your productivity is enhanced and you feel like you’re truly working in a seamless world.In short, would I recommend the Samsung Galaxy Tab? No. Wait for the second generation, and only after you’ve had a look at RIM’s Playbook and other similar devices running the Android OS optimized for  tablet use (Honeycomb). And just maybe you should have a look at the second generation iPad, but be careful that youseparate fact from fiction, hype from reality, and don’t get caught in someone’s distortion field!

I hope in a future  addition to  write  about what to look for in a tablet if you’re interested in investing for your school or district. I think that after the tablet frenzy that is coming our way, you will want to have a good, concise overview of what makes most sense when purchasing for education. Look for that article to come your way when all of the dust has settled ‘in the season of the tablet’, and some standards are set and benchmarks set.

An estimated 100 industry and educational leaders from across North America will be on hand to celebrate Canadian innovation and to explore Can/Am partnering opportunities.  This ...
X