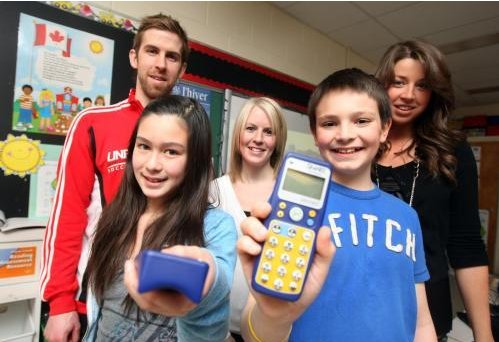 “My students and I are thrilled to have won this contest.  It is very gratifying to know that we were successful in putting together a video that represents our use of technology to enhance learning, and create meaning in our 21st century classroom,” said Barry Janzen, Western Canada contest winner.

My students, their parents, and I couldn’t be more excited about winning the video challenge!  Technology infusion and teaching kindergarten are two of my passions, and blending them together into a developmentally-appropriate educational experience has been very rewarding.  Technology has been invaluable in my quest to teach my students all they need to know in kindergarten,” says Devon Caldwell, Central Canada contest winner.

Park Street is very pleased to have been selected as a winner for this contest.  Our staff and students are very proud of the many ways we integrate technology into our school on a daily basis, and are always looking for new ways to aid students in reaching their dreams and pursuing their passions.  Our project was a representation of the first class staff and students we have in our school,” says Jonathan Crossland, Eastern Canada contest winner.

The annual contest challenges teachers and their students from across Canada to share their successful classroom practices using digital technology.  Teachers from publicly funded schools put their creative videography skills to use to qualify to win a total over $15,000 in technology prize packages for three (3) lucky Canadian schools.   “Our national contest winners are a testament to those educators who go beyond the call of duty to embracing the notion of 21st Century learning to support student success. We’re proud and humbled by the excellence they shared through their video submissions. While we’re on the cusp of a digital revolution in education, our challenge remains to get beyond the pockets of excellence we see across Canada,” says Robert Martellacci, president and publisher of the MindShare Learning Report.  The three contest winners will each be awarded the following classroom technology prize packages totalling over $50,000

Check out the prizes here

Exclusive Podcast with Nancy Knowlton, CEO of Nureva Inc. and Formerly the Co-Founder of SMART Technologies

Nancy Knowlton, Co-founder, President and CEO of Nureva Inc. A notable name in the EdTech space, Nancy and her husband, David Martin, created and built ...
X